The History of Sports and Advertising.

Sports Marketing Then and Now

Sport has long been affiliated with advertising, and is so popular that it now has its own marketing subdivision: sports marketing.

It isn’t hard to see why brands are quick to jump on the sports marketing bandwagon- it’s one of the only platforms that retains the power to spread messages on a vast scale… Something that’s becoming increasingly difficult due to new technologies and changing consumer habits.

Today’s generation is more interested in on-demand entertainment, like Netflix, than live broadcasts. That is, unless it involves sports… The 2016 Rio Olympics saw half of the world’s population tune in through traditional television broadcasting, with a wide range of demographics watching the action. Sports fans are fiercely loyal towards their favourite teams and athletes- giving brands the opportunity to tag onto their devotion and use it to drive profit.

In light of the powerful bond that sport holds with advertising, and to celebrate the launch of our new full motion digital out of home screens on Hotel Football, next to Old Trafford, and Boxpark, in front of ‘The Cathedral of Football’, the iconic Wembley Stadium, we’ve taken a look at historical sports marketing along with today’s sports marketing, showing its ever increasing importance. 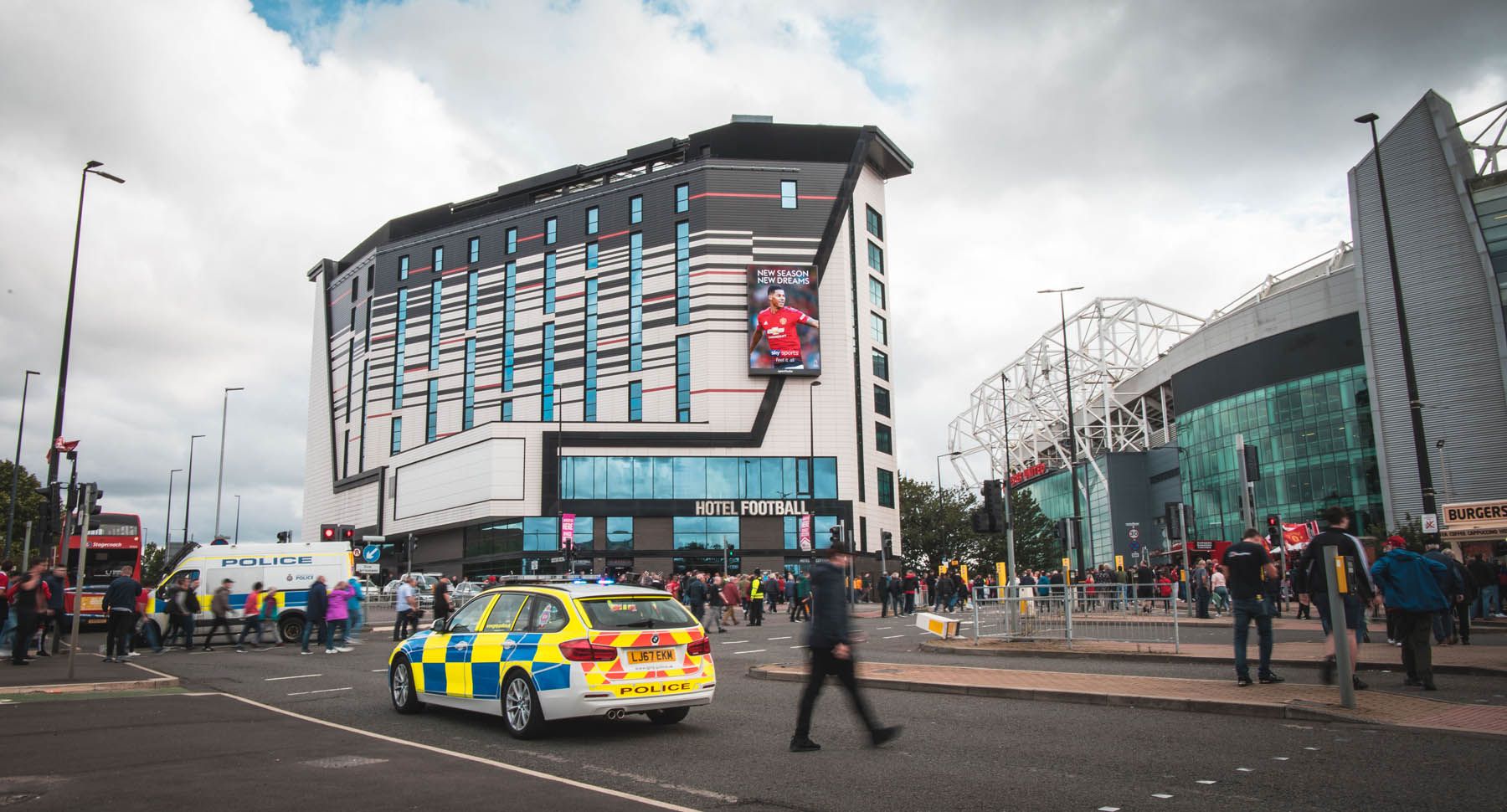 1858– It was way back in the mid 1800s that the first athletic event requiring paid admission was held. This marked an exciting development in the world of sport- profit! Hence, we thought that this would be a fitting place to start the timeline, when sports became profitable, undoubtedly piquing the interest of businesses.

1870– Tobacco cards were the first promotion of a product not related to the sports industry, through the use of sports. Inserts showing popular athletes were placed in packets of cigarettes, nowadays seen as a vintage collector’s item. The aim was to increase sales through the association of sports stars. 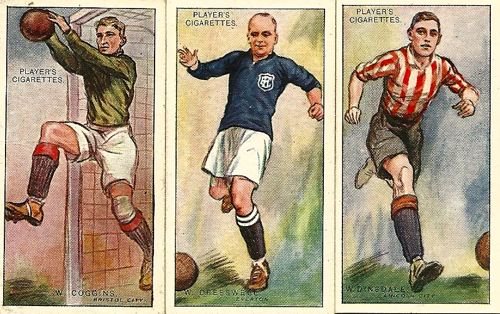 1923– The longest running endorsement deal with a sports brand was signed by golfer Gene Saraken and Wilson Sporting Goods. Saraken was the brand’s first member of advisory staff and maintained a strong relationship with them until his death in 1999, showing the longstanding value of sports endorsement.

1928– In this year, Coca-Cola first partnered with the Olympics. Can this sponsorship deal attribute to the immense successes of the Coca-Cola Company? It’s definitely possible… The Olympics has proved an invaluable connection for Coke, hence why the deal continues to this very day.

1934– General Mills spotted a great opportunity for their cereal brand, Wheaties, in which they began to feature famous athletes on boxes. This went hand in hand with their proposed slogan; ‘The Breakfast of Champions’. The first athlete featured was American sportsman Lou Gehrig. 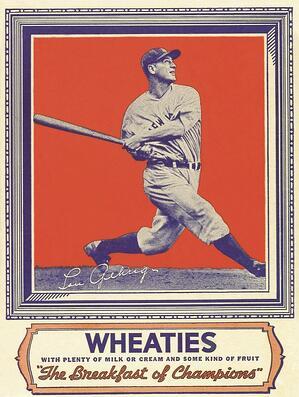 Lou Gehrig on a Wheaties box

1936– Adidas saw a chance to get in on the sports marketing game, and grasped it with both hands. Founder Adolf Gassler noted that Jesse Owens was a shoe-in for the 1936 Berlin Games, so he gifted Owens with free merchandise, making him one of the first sportsmen to receive products for free to be used for promotional purposes. This is something that is widely practiced today, with ‘influencers’ receiving thousands of pounds worth of free products to try out and endorse at their own will.

1954– Baseball stadium Sportsman’s Park has its naming rights sold to brewery Anheuser Busch, becoming known as Busch Park, a first in the world of sports and advertising. What’s more, in 1954 the very first issue of Sports Illustrated hit stands, providing brands with ample opportunity to advertise directly to sports fans through a sports publication.

1964– Don Carter, a professional bowler, signed the first million dollar contract for an endorsement deal with bowling ball company Ebonite. Furthermore, Blue Ribbon Sports was founded- the start-up that in the next decade would blossom into Nike, who later signed sponsorship deals with major sports stars like Michael Jordan.

1980– At the start of the eighties decade the first large screen was installed in Dodger Stadium by Mitsubishi. These screens are now incredibly common and play a big part in watching a live game, allowing for close-ups, replays and of course ads.

1986– TAG Heuer started to position their brand as the leading sports watch and consequently got involved with athletes, using popular sportspeople as brand ambassadors. For example, a witty ad featuring Carl Lewis used the tagline ‘occasionally, our watches run fast.’ 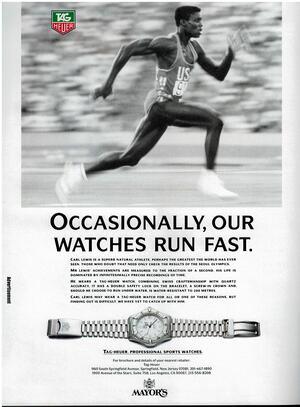 Fast forward to recent years, and sports marketing is everywhere. Think of the Super bowl and the millions of dollars that brands pay for those precious ad slots, which have become a phenomenon in their own right. Think of the sleek out of home advertising that you note at and around sports venues, such as our Hotel Football Mega Six Sheets at Old Trafford. Think of the wealth of brands that advertised opportunistically off of the back of the recent World Cup action, when England surprised us all by getting through to the semi finals… Brands know that sport is universally loved and want to piggyback off of that success.

Coca-Cola– Coca-Cola are heavily involved in sports marketing, partnering with the likes of the FIFA World Cup to launch a dynamic marketing campaign this past football season in summer 2018. Their approach focused on keeping fans and those involved in the tournament refreshed, generating magical experiences and paving the way for a ‘lasting community legacy’, targeting inclusion, sustainability and youth football development. The brand realises the vast benefits such influential partnerships can have, allowing the drinks brand to target a huge variety of demographics, as people all over the world tune into the World Cup. What’s more, Coca-Cola have just become the seventh official partner of the Premier League, starting in January 2019! 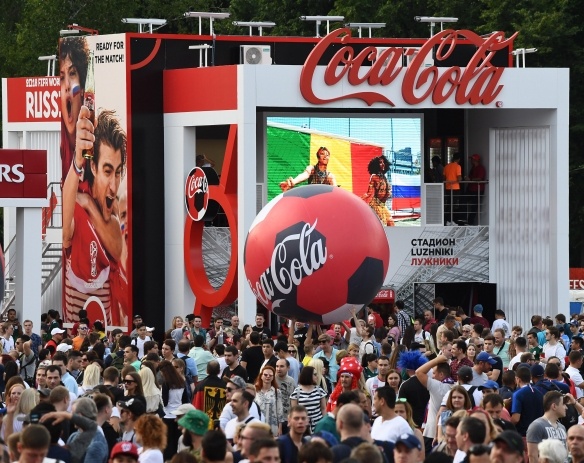 Head & Shoulders– Head & Shoulders have become the FA’s first official haircare partner this year. The deal will last until August of 2020 and will see the brand advertise through specialist content scripted with both the England men and women’s teams. Their angle focuses on giving players the confidence that’s needed when they’re in the spotlight- clever! It shows that brands that use sports marketing successfully aren’t always from stereotypical industries, like male grooming and beer, but can be expanded into new industries like haircare for both men and women.

Gillette- Gillette have been longtime fans of sports marketing, using influential athletes to promote their shaving products. One of the most prominent examples of this was the commercial created for the 2016 Olympics, featuring a star-studded range of professional athletes including Neymar Jr., Ashton Eaton, Ning Zetao and Andy Tenant. The athletes all came from different sporting backgrounds and came together to represent Gillette’s message of ‘Perfect Isn’t Pretty’ in the powerful campaign. Again, this provides an example of a brand that isn’t traditionally associated with sports, to highly successfully market their non-sports related products through sports association.

Bud Light- Lastly, Bud Light has recently announced its partnership with the FA- becoming the official beer and partner of the England Senior Men’s Team. The brand has only recently taken on the UK and has quickly become a hit with its catchy ‘Dilly Dilly’ tagline, which is slightly ridiculous but incredibly powerful in bringing the brand to the forefront of consumers’ minds. Budweiser remains a long term partner of the FA and Bud Light will focus on increasing presence at Wembley, through clever branding and placement. 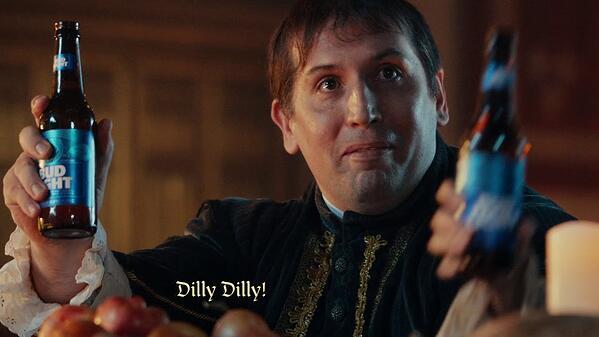 To summarise, over the years marketers have realised the immense opportunity that there is in capturing audiences when their emotions are highly leveraged, and it appears that more and more brands want to get involved in the action. We’re eager to see where sports marketing goes from here and the exciting role that out of home advertising has to play, as it can only grow more and more impactful.

How To Buy Outdoor Advertising
Scroll to top